Although it happens frequently, almost every Android geek and pro-user out there is now quite excited to have the most ambitious Android releases in history of the open source Smartphone OS — Android v5.0 Lollipop that was named as Android L when unveiled on June 25th 2014 during Google I/O 2014 Conference keynote.

And, listen, all foodies out there: Google still loves food, and particularly Lollipop. Well, we agree with the fact that Android Lollipop is the most awaited, ambitious and productive Android update in history and it has a number of features for every Android user, in terms of both visual beauty and productivity.

Yet, we understand that you might not have heard of all noteworthy features that are offered by Android v5.0 Lollipop. That’s why we decided to do a post on, what is new in Android v5.0 Lollipop, focusing on how it is so different from preceding versions. First, we will have one brief introduction to Android v5.0.

Android v5.0 Lollipop — the Sweetest Lollipop Ever for Android Users

It is not often when we call an Android update ‘sweet’, though codenames of most Android versions are sweet, let it be Éclair, Cupcake, Jelly Bean or KitKat. Talking of sweetness, Android v5.0 Lollipop has much to offer, as this update completely redefines Android, particularly in terms of looks.

Currently, despite Motorola-made Nexus 6 and HTC-made Nexus 9 that do have on Android v5.0 Lollipop by default, most Smartphone manufacturers are yet to unveil OTA updates for their devices. However, it makes enough sense to prepare your device your Lollipop update — clean up some space, first of all! Now, we will check out prominent changes that Android Lollipop brings to the stage! Before we observe Lollipop as a software update for Android devices, it has to be noted that this update expands Android into a lot of other devices, especially wearable devices such as Smartwatches and Smart TVs. In addition to these, you can soon expect Android in your cars as well — that sounds great, doesn’t it? So, now, we will check out, what the most ambitious release for Google Android offers.

Let us not go to the theoretical aspect of Material Design, as there is a plethora to understand and interpret! Yet, as far as a normal Android user is concerned, implementation of Material Design will redefine looks of Android in a way that makes its preceding versions a bit ‘out of the box’. By increasing use of grid-based layouts, transitions, padding, lighting, shadows, responsive animations and layouts, Material Design takes card-based design of Google Now as its root! In addition to these, Android v5.0 Lollipop has made some notable changes to typography of the platform. As a normal user, you will find the new Android to be more interactive, with the stacked arrangement of active tasks and Chrome tabs, easy to use notification bar etc. Plus, when it comes to Lollipop-powered Tablet PCs, multitasking shall become an interesting task! Apart from this, it’s glad to know that several applications have already made their journey into Material Design. For instance, one of my favourite app, Financious, has been updated with Material Design, improving the interface a lot! In addition, most of Google Apps have been updated to bear Material Design and you can install those updates if you want to enjoy Material Design, regardless whether your device will receive Lollipop update. 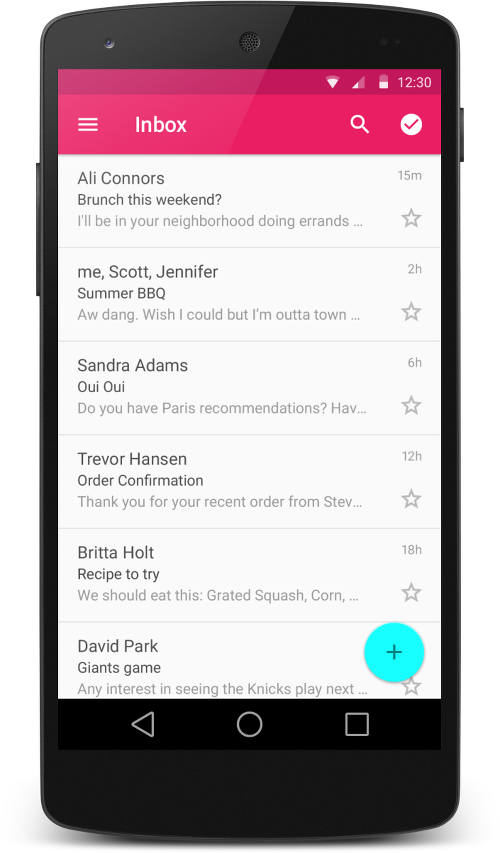 Next time when your friend that owns iPhone or iPad talks of lock screen notifications and management, don’t wait to reply them — Android v5.0 Lollipop brings that as well! In addition, there are options to manage notification with regard to your priorities. As a whole lock screen of Android v5.0 Lollipop is great, as it lists out pending notifications — you can swipe to ignore or expand to act. On the other hand, as a matter of privacy protection, you have option to restrict specific applications that might show notifications containing sensitive information. Given that Material Design influences the way you toggle between different apps you use, Android v5.0 Lollipop has a new way of multitasking. In addition, through introduction to Recents interface, Android v5.0 Lollipop extends the power of multitasking into deeper sections of an application. Using Recents, for instance, you can toggle between a handful of tabs that are active in your Google Chrome browser. Well, we know we don’t need to say more, because you know it, very well! Unlike previous version of Android, Android v5.0 Lollipop lets you have multiple accounts in your device! Apart from an owner account that has access to each and every part of a device, you can have User Accounts & Guest accounts. User Account has limited access to device’s resources but that profile will be present in the device until the moment you delete it. On the other hand, Guest Accounts are meant for one-time use and all kinds of information of the user will be erased when the device shuts Guest Mode down. Indeed, the feature is something superb for those who have to handover their device to other people. Unlike previous versions of Android, Android v5.0 Lollipop is running on Android Runtime, which is commonly known as ART rather than the previously used Dalvik. As opposed to Dalvik, ART depends upon processing that comes even before launch of application. In the long run, if we are to believe claims by Google, you can have superb power when it comes to performance. In addition, Android v5.0 Lollipop offers support for 64-bit processors along with 32-bit.

Project Volta of Google will come as a guardian angel if you always find battery life of your Android device deficient! This works by scheduling processes according to their battery consumption and it makes use of several algorithms to define how and when to finish one task, with respect to environment of device. Also, related to this, you can have an estimate of battery life. Talking of security of device, Google has adapted a few technologies that were first found in Motorola devices. Just as ‘Trusted Devices’ feature of Motorola, Android v5.0 Lollipop has introduced Lollipop Smart Lock. In simple words, Smart Lock lets you skip using the lock screen if a trusted device is nearby. For instance, if some sort of Bluetooth-based device is nearby, you can just skip traditional unlocking.